Was this article useful?
Click the thumbs up >
Renault’s new 2.0-litre Clio Renaultsport 182 Trophy is to make its world debut at this year’s Canary Wharf Motorexpo from June 13-19.

The Trophy is based on the Renaultsport 182 Cup with several technical changes. The suspension is based on the Clio Cup set-up. The Trophy has lower ride height, stiffer springs, re-rated dampers, strengthened front wheel hub carriers and revised steering geometry.

For the first time, Recaro Sport Trendline seats are fitted, upholstered in black. The steering wheel is upgraded with leather and rubber thumb grips. The door-sills have Renaultsport-branded protectors and Trophy logos along the outer side sills.

The UK currently takes over half of all Clio Renaultsport production and 500 righthand drive Trophys will be produced (with Switzerland the only other country to market the car). 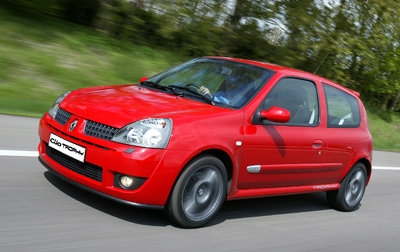