Was this article useful?
Click the thumbs up >
The 5-series had a tough job when it was launched in 2003. It had to replace one of the best-engineered and most respected cars in the world: the old one. But it’s done it.

Despite initial reservations, the Chris Bangle design is modern and crisp and a better application of the theme than other models. Its impressive electronic gadgetry includes active steering, head-up-display and active headlights, and has seriously moved BMW’s game on. 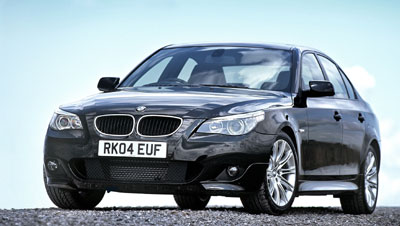 Comfort
An ideal driving position is easy to achieve and the abundance of buttons has been reduced through the use of the i-Drive system, pioneered on the 7-series.

Engines
Lightweight six-cylinder petrol units impress with a smooth yet potent delivery. In addition to a 3-litre unit, the 2.5 is available in two states of tune for the 523i and 525i. V8 unit is effortlessly powerful.

Amazingly, the diesel units impress even more by being refined yet boasting good economy and bountiful levels of torque. All models are fitted with a six-speed gearbox as standard. V10-engined M5 was launched in 2005 with a colossal 500bhp.

Safety
A four-star Euro NCAP crash test score is below average when rivals from Audi, Mercedes and Saab have achieved five. Six airbags as standard (two more are optional) plus every electronic aid is standard, too.