Was this article useful?
Click the thumbs up >
Knights BMW and Mini has officially opened the doors to its new Radial Park premises following a £10m investment.

Based near Stoke-on-Trent, just off junction 15 of the M6, the dealership boasts and industry first with the addition of a Starbucks coffee franchise, the only one at any BMW and Mini dealer in the UK.

David Vickers, Knights’ operations director, said: “We have invested in areas which we feel will benefit the customer most and it is important to be able to adapt to meet changing needs, for example, by providing wi-fi internet connection on-site.”

Set across seven acres, the development has been ‘purpose-built to accommodate visitors’ requirements’ with a car wash and 120 dedicated customer parking spaces.

It is a significant move for Knights, which has relocated its Pool Dam operations in Newcastle-under-Lyme, and it will now be able to display in excess of 120 approved used BMWs and 40 Minis in its outside facility.

The BMW showroom itself will accommodate 16 new cars, as well as an additional 70 used cars, while Mini will move to its own purpose-built showroom which will display up to eight new cars.

Jim O’Donnell, managing director of BMW, said: “This is a landmark development, not only for the region, but for the UK as a whole. I believe it’s the best BMW dealership in Europe.” 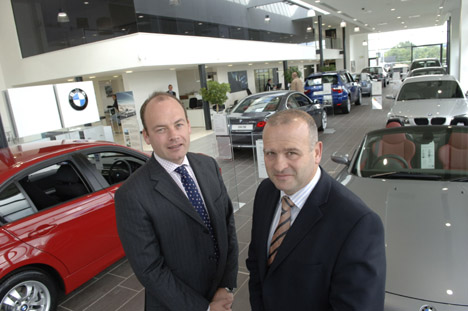