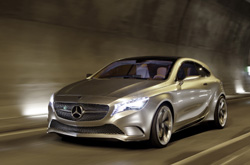 Mercedes-Benz UK believes it can lead the premium segment in the UK with a raft of new product and adapting the atmosphere in its showrooms to appeal to a younger audience.

Managing director Gary Savage believes the 120-strong network already has the facilities in place to make it happen and that the brand can go from selling 80,000 units this year to 100,000 without making big changes.

He told AM: “We don’t need bigger showrooms and we don’t need more used car space. We have the right facilities and we’ve got the right coverage.

“We have the ambition to lead and there’s clarity within the business about that fact.” Mercedes wants to overtake Audi and BMW by 2020.

The launch of a new B-Class in March 2012 will mark the start of a new range of more youth orientated models based on the same
platform to help the brand achieve higher volumes.

Mercedes will be competing for younger customers with new models like the new A-Class this time next year, which will take on the BMW 1 Series and Audi A3, and it will also launch a new crossover model as well as a baby CLS.

Savage said: “The A-Class will see us make a significant step-change in volume and it will open us up to conquest customers.

“We’ll be preparing the network in the run up to the launch of the new A-Class by changing the atmosphere of the showroom to make it relevant to this new audience.”

Savage rejected the idea that younger customers could be dis-missed when entering a Mercedes showroom.

He said: “I can see how people might come to that conclusion, but we’ve got a youthful team of sales executives in the network that will be able to connect with customers.”

Savage said David George, Mercedes-Benz UK’s new marketing director, would be key in promoting the brand in a different way.

Mercedes recently teamed up with ex-Formula 1 racing driver David Coulthard to hold a virtual competition which saw members of the public race against him in an SLS on Sony PS3s at Mercedes-Benz World while he drove the real thing on the Top Gear test track. The event was broadcast live.

“We’re pushing on a very open door and we don’t have to convince our network, they’re hungry for this change.”