Many of the major European markets saw significant sales increases last month following an improvement in their economies - but Greece and Spain experienced decreases of 15.3% and 23.5% respectively.

According to Jato Dynamics, Volkswagen’s recently revised Passat continues to record greatly increased volume, with a growth of 49.2% in May and 30.6% for the year to date, while Ford’s new third generation Focus is performing strongly with sales 18.6% higher than its predecessor recorded in May 2010.

Opel/Vauxhall posted sales in May 17.4% higher than a year earlier, with both Corsa and Astra claiming top five positions. 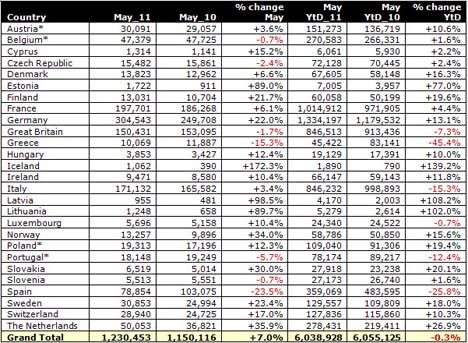 Calum Macrae, PwC Autofacts lead analyst, said: “We estimate that May was the strongest growth month in the market in the year so far.

"However, we believe that the 7.0% was largely superficial based as it was on three more selling days in many markets than was the case in 2010.

"In France for example, actual sales in May increased by 6.0% but on a like-for-like basis with May 2010 sales would have actually declined by 8.3%.

“That said, there is evidence that the European market be over the worst of its post scrappage blues as, for example, the Italian market posted its firstly monthly increase for 14 months.

"Our overall European sales forecast for the year which remains at 13.7 million is predicated on many markets performing better in the second half of the year, as private sales improve due to weaker scrappage distortion and lower bases for year on year comparison.”