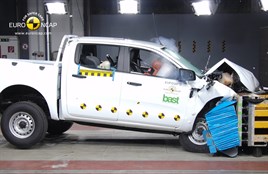 Euro NCAP has revealed the top performers for car safety on new models which were launched in 2011.

Last year, Euro NCAP published the results for 53 new car models available on the European market, among which were the first commercially available electric vehicles.

To be selected the safest cars of their categories, the following vehicles achieved a five star rating and showed good scores in each of Euro NCAP’s four areas of assessment. The top achievers per category are:

Euro NCAP said special mention should be made of the Ford Ranger, the only pickup tested by Euro NCAP in 2011. The Ranger is the safest pickup tested by the organisation and scored highly in all areas of assessment, most notably in pedestrian protection.

With electric cars hitting Europe's roads this year, the organization released the results of four EVs.

Plug-in vehicles are exposed to the same test conditions as their gasoline counterparts, while special attention is paid to battery integrity after a crash. The Nissan Leaf was the first of its kind to achieve Euro NCAP five star overall rating, placing itself amongst this year’s best small family cars.

Euro NCAP rewarded several carmakers for their advanced safety features not yet included in the rating scheme.

“The safety case for AEB systems is very strong and we are therefore strongly encouraging manufacturers to increase the availability of such systems on new cars. We are well underway to add the assessment of these systems to the overall rating and to make these systems a requirement for five stars in the future.”

In 2012, Euro NCAP introduces stricter standards by increasing the minimum score in the pedestrian assessment from 40% to 60%, reflecting the stepwise improvements introduced by carmakers of the last years in this field.

While a number of carmakers have already demonstrated that cars can be engineered to pass the new limit, the increased demands will challenge others to improve the safety for vulnerable road users.