Face to Face: For John Banks Group it’s all about the customer, on two wheels or four 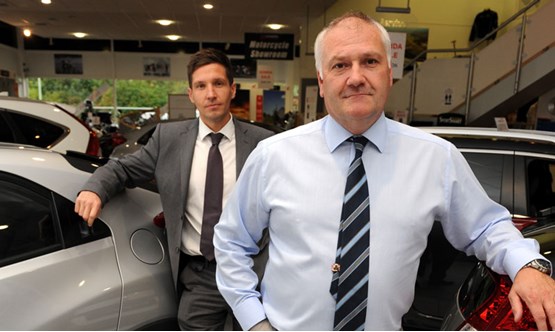 Motorsport has long been a passion for some of the figures in motor retailing. John Cleland, the 1989 and 1995 British Touring Car Championship winner, runs a Volvo and Jaguar dealership in Galashiels, Scotland, and fellow BTCC and FIA GT racer Steve Soper took on a Lincoln BMW dealership as he retired from his race career.

The history of John Banks Group follows a similar pattern. John Banks was one of Britain’s leading motocross racers in the 1960s, winning the domestic championship four times and finishing second in the FIM 500cc Motocross World Championship in 1968 and 1969 with the BSA team. As the end of his racing career neared, in 1973 he opened an independent garage and forecourt in the quickly growing Suffolk town of Bury St Edmunds, and added a Honda motorcycle franchise a year later.

Five years on the business had outgrown its location so moved to a newly built showroom, from where John Banks Group retailed 1,000 motorcycles a year. Current managing director Mark Banks, John’s son and also a 125cc British Motocross champion, recalled how his father was close to Hirotoshi Honda, the head of tuning and race division Mugen and son of Honda founder Soichiro Honda, and Hirotoshi would often stay at their home when visiting.

“We had Honda cars in the showroom and slowly the business went from motorbikes to cars,” said Banks. In 1989, the company stopped selling road bikes but retained off-road bikes for a further three years before pulling out of motorcycle retailing completely.

“It was horrendous, we were busy fools. The market had just disappeared,” Banks said.

Yet John Banks Group reintroduced motorcycles at its Bury St Edmunds operation in 2011 and now sells scooters at the Honda car dealership in Cambridge, which it bought from Priory Motor Group in 2006. Why the change of heart?

Banks gives three separate reasons. The first is the growth in East Anglia’s population, including immigrant workers in the agricultural industry. At a time when many people are concerned by fuel costs and the proportion of two-car households has declined slightly, being able to sell a 150mpg Honda CBF125 motorcycle on a £99 deposit three-year hire purchase with free leathers and helmet helps him target commuters and people on low salaries.

The second is Cambridge’s heavy road congestion. But Banks said the assumption that a scooter business would be a gold mine hasn’t turned out to be quite accurate. A city centre so heavily geared up for cycling students has few parking spaces for mopeds.

“We sell a few but it isn’t anywhere near what you’d think it would be,” he said.