Analysis: Bentley is on the comeback trail 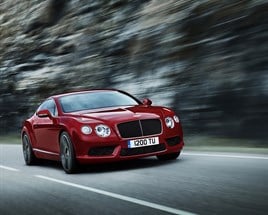 The success of the Continental range has allowed the dealer network to build up its used car operation in recent years. This has been a vital aspect for the profitability of the retail network, said Simpson, and it will continue to be a key development for customer loyalty and maintenance of strong residual values.

As in many franchises, the availability of younger used cars has diminished so the age profile of dealers’ stock has broadened slightly.

Bentley responded with a warranty product which can be sold for cars up to 10 years old. A fixed price servicing offer is also in place within the network to appeal to drivers of first generation Continental models who may have moved away from the carmaker’s authorised dealers.

On the new car sales front, dealers are supported by Bentley Financial Services. In 2012 it launched its first PCP offer on a Bentley, under the Solutions brand, which made the entry model Continental GT V8 accessible for a monthly budget of £888 after a £43,500 deposit or part-exchange. Simpson said the Bentley customer has typically preferred outright purchase in the past, however finance now has around a 40% uptake.

It’s also proving a useful conquest tool, as 70% of Bentley’s PCP customers are coming from another brand, and many are younger buyers.

Combine the finance offering with the V8’s capability to travel up to 500 miles on one tank of fuel if driven carefully – previous Bentleys with sub-20mpg fuel economy are very frequent visitors to the pumps – and the brand has opened up to a slightly broader audience.

It has also expanded its UK marketing team to focus on a wider luxury consumer base, and now incorporates social media into its strategy. It is also set to return to international motorsport at the end of this year, and has been showing off a GT3 race car at various motor shows globally to generate public enthusiasm.

Bentley’s UK retail network has seen a few changes in the years since the recession began. Bentley Hadley Green in Barnet was bought by long-serving VW Group partner Colbornes Group last August, six months after Vindis Group opened Bentley Cambridge and put its existing Bentley Norwich dealership, which it bought from Sytner in 2009, into an aftersales support role.

In 2011 HR Owen, owner of the world famous Jack Barclay Bentley dealership in London’s Mayfair, took over Broughtons’ three Bentley dealerships to become the luxury brand’s largest UK partner. Bentley Motors is HR Owen’s largest shareholder, with a 28% stake in the dealer group.
Simpson said the flux in the network has now settled down. However, there may be open points to develop in the future as the brand continues to grow. With the increase in Bentley’s annual volumes comes a desire to ensure those new customers are well served geographically, so Bentley will consider its opportunities to add sites as necessary, possibly extending its current partnerships.

Profitability of the network is not under threat, she said, as all sites are working extremely hard to achieve the best results. Although Simpson would not give figures, she said the return on sales has improved over 2011 and she expects the uplift to continue.