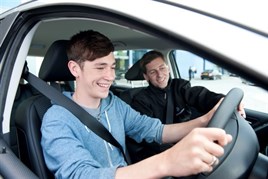 The Department for Transport (DfT) is to present a green paper looking at a range of options for improving the safety of newly-qualified drivers.

Among the proposals being considered are:

- Enabling learner drivers to take lessons on motorways, and perhaps during adverse weather conditions or during darkness to encourage greater practice prior to taking a test

- Incentives for young drivers to take up additional training after passing their test.

The proposals were unveiled at a summit hosted by the DfT. Representatives from the Ministry of Justice, Department for Health and consumer organisation uSwitch were also present.

The Government is expecting the changes to result in a reduction in the high cost of vehicle insurance currently facing motorists – especially young drivers.

Transport secretary Patrick McLoughlin said: “It is alarming that a fifth of people killed or seriously injured on our roads in 2011 were involved in a collision where at least one driver was aged 17 to 24.

“Improving the safety of our young drivers is therefore a real priority and will not only reduce casualties but should also mean a reduction in the sky-high insurance premiums they pay.”

McLoughlin said more still needs to be done before young drivers feel satisfied they are getting value for money with motor insurance.

Justice minister Helen Grant said: “Honest drivers should not have to foot the bill for a system that has been exploited by others to generate large profits for themselves.

“We have taken major steps to put this right, including changing no-win no-fee deals so lawyers can no longer double their money, banning behaviour which encourages questionable claims and tackling the whiplash problem. This will all help to create savings that insurers can pass on to their customers through lower premiums.”