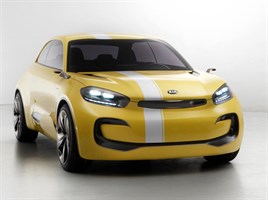 The Cub was designed by Kia president and chief design officer Peter Schreyer in Seoul, is less than four-metres long (slightly smaller than an MX-5) and has suicide doors which reveal no traditional B-pillars.

The Cub features a new version of Kia’s 1.6-litre GDi engine – recently confirmed as the engine for the new Pro_Cee’d GT and Cee’d GT.

The Cub will hit 0-62mph in under eight seconds.

Kia currently has no plans to put the Cub into production.

Paul Philpott, Kia UK president and chief executive, told AM recently that now the brand’s core model range was in place with the new Carens, the focus would now be on expanding the range into niche areas.

A rear wheel drive sports model has been hinted at for years but the steady stream of recent concepts and models like the Cee’d GT show a positive indication that a coupe production model is on the cards.