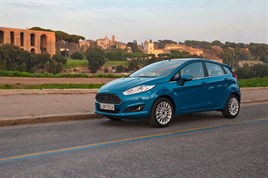 New car registrations increased by 5.9% on the back of the plate-change month of March to 394,806 units.

Volumes for March are still some 12.1% below the 2007 pre-recession market total, but it is the best result since the 2010, when more than 50,000 cars were registered through the scrappage scheme.A

Adjusted for total selling days, CAP believes the increase in March figures is more like a 9.6% increase. Dylan Setterfield, CAP senior forecasting editor, told AM on Twitter: "Some say retail demand is steady, others that it has fallen drastically. Not grown 10%!."

Andy Barratt, Ford sales director, told AM: “Our retail performance was particularly encouraging. The market can be fragmented with short-cycle rental and pre-registration activity be we really don’t participate with that.

“The dealer network really dug deep for the performance.”

“Despite ongoing economic concerns, consistent monthly growth in the market is an encouraging sign of returning consumer confidence as motorists are attracted to forecourts by new models and the latest technologies.”

New car registrations continue to grow in key March market, with demand for 13-plate cars up 5.9%

The Q1 outturn was 2.7% above SMMT’s forecast, which could lead to the market exceeding SMMT’s 2.057 million unit full year outlook.

The SMMT believe the market’s growth over the past 13 months has been supported by increases in private registrations, although all sales types reported growth in March and Q1 2013.

The mini segment again showed the strongest growth in March, up 56.5%, due to the success of new models.

Double digit gains were also reported in the MPV and dual purpose segments. All segments, except upper medium and luxury saloon, grew in March.

The Ford Fiesta was the best selling model in both March and Q1.

Mark Ovenden, Ford of Britain managing director, said:  "Vigorous consumer demand is driving up our share of more profitable retail sales thanks to our latest range of vehicles and the UK’s strongest dealer network."

Sue Robinson, director of the RMI National Franchised Dealers Association (NFDA), said: "It is positive that new car sales were up in March as retail demand continues to grow.

“Dealers reported strong interest in news cars by consumers who were encouraged into the showroom by  strong manufacturer deals and competitive finance offers.

“Although consumer confidence remains sluggish there are signs that it is starting to grow. The NFDA are hopeful that this is a trend that will  continue through 2013."Winner

Mercedes-Benz has a strong month with a 15.53% increase to 18,870 units boosted by the new A-Class and order books were also open for the new CLA. Honda also posted a positive increase of 23.06% in March to 12,471 units with the help of low rate finance offers on the Civic.

Marcus Breitschwerdt, president and CEO Mercedes-Benz UK, said:  “More new and returning customers than ever before are choosing to drive a Mercedes-Benz, and that’s great news for them, and the thousands of dedicated people we’ve got all over the country who work so hard to achieve these extraordinary results.

“Everybody’s hard work and effort is paying off.  Making our attractive, exciting, affordable premium cars appeal to ever-more people is our mission and it’s a mission we’re continuing to meet head-on.

“Today’s results also show that we’re not dependent on one or two models to bolster the bulk of our sales volumes – we’re selling more cars to more people across the entire range.  AMG appropriately continues to charge ahead, as does every vehicle in our portfolio that we’re volume-controlling by either its graduated introduction or phased run-out.

“We don’t take any of this success for granted, and are using the momentum of our new car registration results to continue to offer great deals on fantastic products through our UK network of excellent dealerships.  We’ve a wide range of new cars ready to arrive in the UK too, and I’m looking forward to the opportunities and results throughout the rest of the year.”

Renault and Mazda are still struggling in the middle market with 11.83% and 11.31% drops in registrations for March. Renault is still rebuilding its model base and but even the introduction of the new Clio couldn’t help it to post growth in the plate change month.

Mazda hopes new products combined with more flexibility around dealer bonus structures will help it to recover ground in 2013 and beyond (read AM’s analysis in the March print issue).

Alfa Romeo is also still struggling with a small product line up, resulting in a 37.4% drop in March registrations to 964 units.

Head to the SMMT website to download the full table of new car registrations figures for March and the year-to-date.