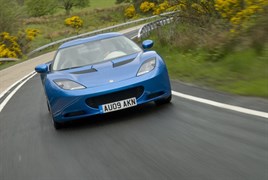 Lotus Hedge End now holds the Lotus sales franchise for the Southampton region and adds a significant foothold to the Lotus Cars portfolio of dealers and service centres nationwide.

Alex Domone, Snows Group franchise manager said: “We will bring the same level of truly excellent customer service to Lotus owners that our valued customers have enjoyed for many years."

The new premises will be opening its doors to first customers on 18th May 2013 with a packed weekend of activities including test-drives, a meet and greet with former Lotus F1 driver Martin Donnelly, customer competitions and Scalextric contests.

AM understands that the opening had been delayed by Snows, which originally planned to launch the franchise in it January, due to negative press reports late last year and speculation about the carmaker's future.

However after a meeting with Lotus Cars CEO Aslam  Farikullah in late February, where he discussed the plans and strategies of the company to move forward with investment from the parent company DRB-Hicom, Snows was satisfied that Lotus Cars is back on track and decided to progress with the franchise.