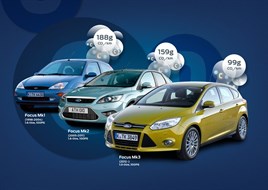 Ford has announced a new ultra-efficient version of the Focus 1.0-litre EcoBoost which will be the first petrol-powered family car in Europe to offer 99g/km CO2 emissions.

The Focus 1.0-litre EcoBoost, which goes on sale in early 2014, has returned 67.5mpg in tests thanks to its specially calibrated 98bhp engine.

“Just a couple of years ago few would have thought that a medium-sized petrol car could break the 100g/km CO2  barrier,” said Barb Samardzich, European product development vice president. “Ford’s 1.0-litre EcoBoost engine has a habit of taking expectations of what a petrol engine can deliver and turning them upside down.”

The International Engine of the Year 2013 and 2012 makes the new model more powerful than a first generation Ford Focus with a 1.6-litre engine, while producing 47% less CO2.

The new model will extend to three the number of Focus models offered with the 1.0-litre EcoBoost engine, alongside the standard 98bhp version, with 109g/km CO2 emissions, and the 123bhp with 114g/km CO2.

Available immediately in the UK are new Ford Focus derivatives with satellite navigation as standard.

The Focus Zetec Navigator is offered in addition to the standard Zetec series and adds Ford nav, new-design 16in alloy wheels and centre console.