July saw a lift in used car sales volumes and conversion rates, according to the National Association of Motor Auctions, while the overall average value also increased by £40 per unit.

NAMA members sold 88,697 units, up 6% from June’s 83,637 units. The recent slide in conversion rates was halted, with a two percentage point bounce back to May’s level of 74% after June’s seasonal low.

Justin Lane, NAMA chairman, said: “We are hopeful that the slight rise in conversion rates is likely to improve further in August due to the reduction in available stock as a result of the impending plate change.”

NAMA predicted that demand and values of convertible cars will now fade and interest in 4x4s may begin to build in line with seasonal trends.

It said that vendors may hold on to their 4x4 vehicles for specialised sales in late September or early October, but warned this may be counterproductive given the steadily reducing seasonal demand for SUVs as dealers hold stocks all year round. Retail demand for these types of vehicle appears to have remained buoyant through the summer.

The UK’s largest motor auction group, BCA, reported that its average value for dealer part-exchanges in July fell by just £2 or 0.01% to £3,690. Although tiny, that is the second monthly fall since the record value of £3,718 achieved in May.  Year-on-year July values were ahead by £741 or 25.1%. The average age of part-exchanges continued to be some two months lower than a year ago, at 87.3 months, and mileage was also lower. 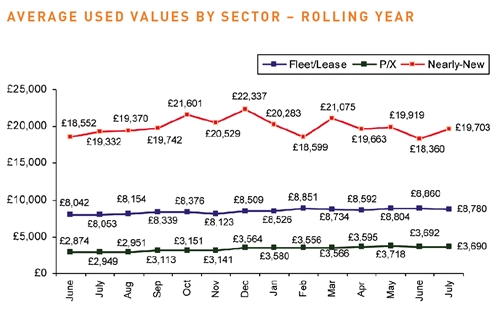 BCA’s UK operations director Simon Henstock said: “Cars entered from dealer part-exchange sources have outperformed the market in recent weeks because dealers are so close to the market and value their cars realistically to tempt buyers in. As in previous months, cars presented in grade one and two conditions will make values well in excess of guide price expectations.”

Daren Wiseman, valuations services manager at Manheim Auctions, said: “July’s figures show a surprisingly strong used car market, especially when compared to the tough times still being seen on many high streets. Clearly, dealers have learned their lessons well in the last couple of years and have become much more selective about which models they remarket via auction. So while we’re seeing segments such as 4x4s losing value at the moment, compact executive models are continuing to appreciate in value, despite a rise in mileage.”

Manheim’s Market Analysis for July showed the average selling price of ex-fleet vehicles dropped month-on-month by £377 or 5.1% to £6,991. However, the average was still 5.6% or £371 higher year-on-year. The auction group blamed the drop on the average age jumping by two months and average mileage increasing by 710, to 50 months and 58,078 miles respectively.

The average selling price fell for nine of the 10 sectors during June, most notably for executive models, which suffered a £1,053 fall as stock sold was higher in age and mileage. However, despite this blip, executive cars are still £842 ahead year-on-year.

Manheim’s Wiseman said the increase in age and mileage is indicative of it being a wholesale market more focused on selling than buying at present. The year to date has been fairly positive for fleet managers looking to dispose of stock to dealers, he said.

He added: “On a final note, we are seeing an increasing demand for 4x4 vehicles. The 4x4 season seems to get earlier each year but reflects the wider market problem of getting hold of good quality stock. So, when buyers see it, they purchase it in the hope it works for them.”

BCA’s Henstock said: “The summer holiday period is typically quieter in terms of buying activity in the wholesale markets but that is being balanced by the ongoing shortage of good quality, ready-to-retail stock.”