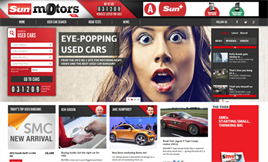 The head of the Sun's new used car classified site said he already has more than 200 dealer groups signed up to supply the site with stock. Jim Murray-Jones said the number of dealers would grow - he aspires to having around 5,000 dealers - based on the appeal of a transparent business offering from sunmotors.co.uk.

Central to this is payment based on "genuine" leads only.

So, two examples he gave of data provided were:

> Live Chat conversations - the conversation has to be two-way, not an automatic response
> Telephone calls - have to be at least 30 seconds long and de-duplicated, so not a total of calls made to one individual.

A total of 55,000 vehicles are contracted to go on the new site in the next few weeks, some of which are a direct feed from the other News UK classified site driving.co.uk. The aim is to have 100,000 towards the end of February when the site goes from being a beta (test) version to one that will be subject to a full consumer marketing campaign.

At the same time dealers will be given access to an online portal allowing them to monitor ad response, showing them views per vehicle, volumes and types of lead.

Talking exclusively to AM, Murray-Jones said: "We rapidly hope to demonstrate to dealers our ability to provide only quality leads. We will only charge for what dealers can exploit," said Murray-Jones, general manager of News UK Automotive and Sunday Times Driving since February 2013.

"Winning dealer confidence is an absolute priority. We need to ensure we build their trust and show that we're not going to over-charge them, but develop a product that benefits them as much as the consumer."

Of value to the consumer, he said, was the fresh take on vehicle search beyond the traditional make, model and derivative drop-down boxes.

"Consumer focus groups ahead of the launch, revealed to us the great number of consumers who did not know of a number of emerging brands in the market. Our search tools, that allow them to look for vehicles based on their lifestyle, budget or environmental concerns means we can bring to light a greater range of choice. This is good for the consumer and dealers," said Murray-Jones, general manager of News UK Automotive.

It was made clear that News Uk will be creating more explicit links between its Sunday Times and The Sun newspaper brands to ensure traffic flow to its classified portals. Murray-Jones wouldn't reveal user numbers, but said the targets for sunmotors.co.uk were "ambitious".

Sunmotors.co.uk has been on the drawing board at News UK for at least a year and extending News UK's influence in the car classified market, beyond its first venture driving.co.uk in October 2012 had long been its intention.

Murray-Jones has worked for Auto Trader, Haymarket and RBS in digital marketing roles.

AM Poll: Is The Sun's move good news for the used car market? Take part in our poll.