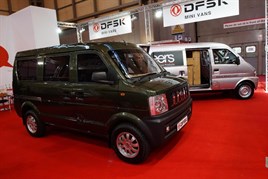 Minivan supplier DFSK has been accused of not dealing fairly with participants in a prize draw to win a van.

The Advertising Standards Authority was asked to investigate whether the competition was administered fairly, after a complainant suggested it had been cancelled due to a lack of entries.

After the ASA contacted Vestatec Automotive Distribution, which trades as DFSK, a winner was selected.

However the ASA noted that DFSK had failed to conduct the prize draw on the date stated in the T&Cs of the promotion, and the prize draw was eventually conducted around 11 weeks after that date, and after the ASA had contacted the company.

The ASA said: "We considered DFSK had not ensured the promotion was conducted under proper supervision or that adequate resources had been made available to administer it.

"We considered the prize had therefore been withheld without justification until that time.

We concluded DFSK had not conducted the promotion equitably, promptly or efficiently and had not dealt fairly and honourably with participants, and the promotion was therefore in breach of the (CAP) code.