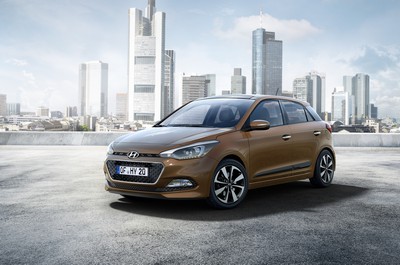 Hyundai Motor has published the first images of the 'new generation' i20, ahead of its world debut at the 2014 Paris Motor Show, in October.

With the launch of its latest model, Hyundai Motor is continuing its presence in Europe's B-segment, with the i20 already enjoying one million sales since 2002.

The popularity of the original i20 has made it one of the company's best-selling cars in Europe.

The key aims of the new model are to "open Hyundai to an even wider audience, further develop perceptions of the brand and confirm Hyundai's position as a truly European automaker", the company said.

The new i20 has been designed and developed in Europe.

Based on a new platform, the forthcoming car features a 2,570 mm wheelbase - 45 mm longer than its predecessor - and providing space for five adults to travel in comfort.

Combined front and rear legroom is "best in class" at 1,892 mm. Boot capacity is also segment-leading: 326 litres when the rear seats are upright.

A "unique-in-class" panoramic sunroof can tilt and fully open. Additional features include an integrated rear-view camera and front and rear LED lighting.

Externally, the upright chrome-framed hexagonal grille has been lowered for design and engineering purposes.

At the back, the new i20 features a gloss-finished black C-pillar and the lamp clusters wrap around the rear wing into the boot lid and feature a ‘boomerang'-shaped LED design.

The public world premiere of the New Generation i20 will take place at the Paris Motor Show on October 2.