Mercedes Benz of Edinburgh was the pits 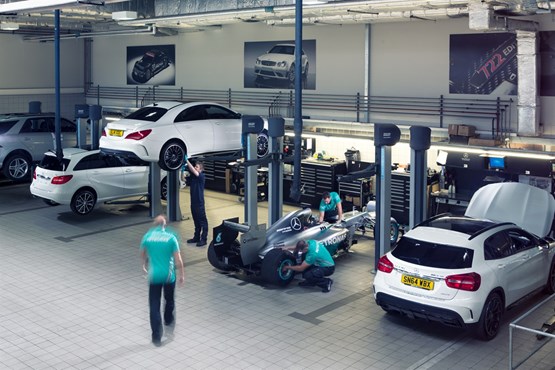 The workshop of Mercedes-Benz of Edinburgh became a temporary pit lane for the Mercedes AMG Petronas Formula One team this week.

The race team requisitioned workshop space at the Eastern Western Motor Group owned site to fettle its F1W03 race car ahead of its appearance at the Race The Runway charity event at Edinburgh Airport.

Graham Affleck, market area director, Mercedes-Benz of Edinburgh, said: "As Mercedes-Benz go, the example in our workshops right now doesn’t get much rarer or faster.

The Race the Runway charity event – held at Edinburgh Airport and sponsored by Mercedes-Benz – benefits the Prince and Princess of Wales Hospice and takes the form of a series of drag races with high performance cars, including the SLS AMG Black Series and the A 45 AMG, going head to head.