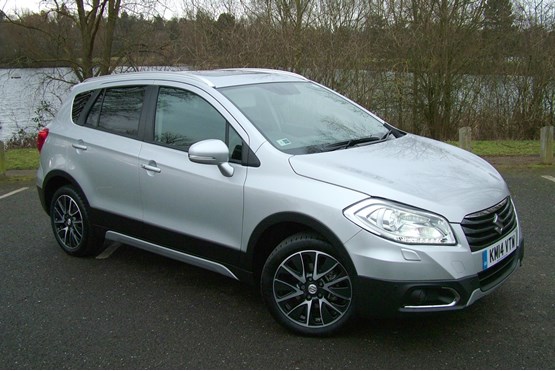 In this era of soft-roaders and crossover SUVs, surely Suzuki deserves recognition for bringing niche, affordable Jeep-alikes to the UK car market for decades. In the 1980s, it seemed the Vitara, with its wide-boy bodykit, was prevalent.  More recently, the Grand Vitara and diminutive Jimny catered for those with all-wheel-drive needs on a relatively modest budget. A new Vitara is due in the UK this year, but one of the important drivers of Suzuki’s current success is the SX4 S-Cross, which entered the market in 2014.

This is why AM will be running one on long-term test until the summer, during which we’ll delve deep into the strengths and opportunities it brings to the Suzuki GB dealer network.

First impressions are good – it’s easy to see why the car’s launch excited Suzuki dealers. An all-new car, engineered by the same team as Suzuki’s excellent Swift supermini, it’s a real step forward from the last SX4 and, with a good marketing push, has potential to bring customers to the Japanese brand.

Our test car is in the highest-specification SZ5 trim. That provides all the luxuries customers spending £22,000 could want, such as leather seats, a double panoramic sliding sunroof, dual zone climate control and auto wipers and lights. Externally, the car is distinguished from lesser trims by its 17in alloys, rear privacy glass, wheel arch extensions and silver skid plates. Inside are sat-nav, DAB digital radio, heated seats, keyless  start and enough storage bins to keep most families happy.

Beneath the bonnet is a 1.6-litre four-cylinder petrol engine that produces 119bhp and keeps CO2 emissions to 135g/km.

The only option fitted to our car is metallic paint, which adds £430 to its £22,049 list price. Suzuki keeps its factory option list minimal, but a range of pre-delivery fit accessories give the dealer an opportunity to tailor the car to the customer’s needs.

What’s been said about the Suzuki S-cross

All models come with generous amounts of kit and are cheap to run, making the S-Cross a desirable family runabout.

This second-generation incarnation shares nothing with its predecessor. It is now a proper C-segment contender, with one of the biggest boots in its class and offered with a choice of two highly economical four-cylinder engines.

The S-Cross is designed to be a stylish and practical family car that’s affordable to run and good to drive on tarmac.