Was this article useful?
Click the thumbs up >
Nanjing Automobile Corporation UK has appointed its first dealer representatives to handle sales of its reborn MGF roadster model.

Merritts in Aylesbury and Amersham and Luffields in Loughborough are the first two dealers announced. However, a spokesperson from NAC UK said it would reveal 11 more appointments soon. It also added that it intends to expand its UK dealer network to 80 sites in the future.

The new MG TF 2-seater sportscar will be sold from the Luffield Cars premises in Loughborough, Leicestershire, and two of the Merritts Motor Group’s Buckinghamshire-based premises in Amersham and Aylesbury. Each will have dedicated showroom space adhering to the MG’s new corporate identity guidelines which will house MG sales personnel, and a service technician.

Stephen Cox, NAC UK sales/franchise manager, told AM last month that the company was looking to sign 10 dealers all at once ‘otherwise it looks inequitable’.

The new announcement strays from the plan slightly, but this is only due to the remaining dealers waiting on their letters of intent.

Cox had previously planned to appoint the first five dealers by the end of May. NAC is planning on holding a signing ceremony for the dealers as this is traditional in China.

David Wood, general manager for Luffield Cars, which was previously a recognised MG X-Power specialist and still an MG service centre in the UK, said: "We feel very privileged to have been chosen as one of the founding retailers of the new MG franchise network. "We are fully committed towards the development of the business and we consider the future of MG cars to be extremely exciting.”

Kevin Badrick, general manager for Merritts, a former MG Rover retailer for 10 years, said: “We are very excited to once again be associated with an iconic name which boasts such a rich heritage, and to be the one of the first confirmed franchised dealers is very special. I’m sure that the strength of the MG marque, its new products and our commitment and experience with the brand and to our customers, will prove to be an offer too good to refuse." 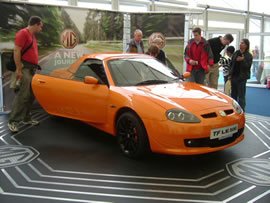