The days of purchasing a large seven-seat MPV as a nice-to-have option appear to be over for the time being.

Only those buyers who must have seven seats or more will even consider taking a look at vehicles in this sector.

This month’s AM Index focuses on the MPV and mini-MPV sectors at three years old/ 60,000 miles CAP Clean.

The most consistent vehicle in this sector is the Toyota Previa, one of the first MPVs, which has lost just £580 in the same period.

The higher fuel costs and the threat of increased VED, has steered many people away from these perceived gas guzzlers.
The smaller mini-MPV sector has also benefited from consumers attempting to downsize.

As odd as it sounds to call some of the vehicles in this sector ‘mini’, this is a trend we are seeing throughout the market, with cars continually moving further away from the perceived size boundaries in their sector.

As an example in ‘Grand’ form, the Scenic and C4 Picasso could easily sit in the larger MPV sector.

The most popular mini-MPVs have generally spent their first three years in the fleet sector. 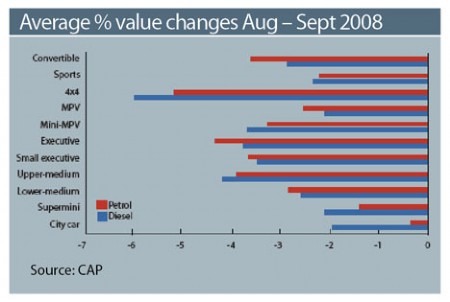 The Vauxhall Zafira, Ford C-Max and Renault Scenic all have sales of more than 70% going to the company car driver.

In fact, the Zafira is seventh highest on the fleet user list, selling more than the Vectra, Passat and BMW 3 Series. It is the eighth best selling car this year.

This means there is a plentiful supply of high quality, well specified mini-MPV vehicles to choose from and some real bargains.

This sector has reduced by 2.4% going into September which, in the current climate, is a strong performance.

The Fiat Multipla continues to fall at a greater rate than its counterparts, losing 5% on average.

This is a continuation of last month and accounts for the reduction of £840 since May.

The Zafira diesel lost only 2.1% going into September and over the same period depreciated at half the rate of the Fiat.

The choice available in this sector is growing, with manageable running costs and real practicality becoming hard to resist for hard pressed families.

The overall car market sees a slight improvement, with fewer large reductions in values than experienced over the past four months.

This is due to a reduction in volume within the market and a release of the bottleneck created by high stock levels at auction which is now beginning to subside.

Not surprisingly, the expectation is that new car registrations will be down this September and there will be fewer part exchanges flowing back to the market. This will have a positive effect on used car values in the short term.

This slight improvement has further highlighted the variances we have seen at a sector level. With few exceptions, large petrol vehicles with powerful engines have completely lost favour.

Superminis and city cars are finding new buyers happy to downsize and take the fuel and VED savings that come with it.