Against expectations, a modest increase meant average values recovered most of the loss sustained in May to sit at £5,802, a £146 improvement over the previous month. Performance against CAP Clean was flat at 96.68%.

BCA says the primary driver of the value recovery was a 16% uplift in the volume of higher value premium fleet cars. These rose in value by £95 or 1% to £10,866.

In the nearly-new sector, values dropped around 8% to £18,792, but volumes remained slim so model mix had a major effect.

BCA communications director Tony Gannon said: “We’ve seen a turning point in demand over recent weeks and both values and conversion levels have been under pressure – quite typical for this time of the year.” He added: “Dealers are saying that retail sales have eased off and this is reflected in the auction halls and online bidding for replacement vehicles.

“However, demand is far from flat, it’s just more selective than it has been and that means presentation and condition becomes increasingly important. “Buyers are competing strongly for cars in ready to retail condition and therefore sellers are advised to appraise their vehicles carefully and consider rectifying any cosmetic damage prior to sale,” said Gannon. 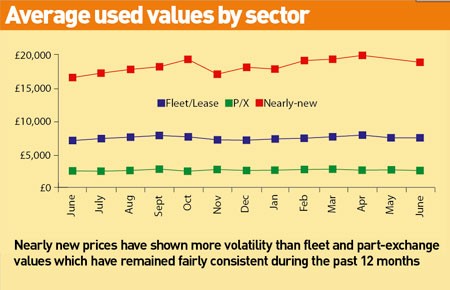