Volkswagen is seeking to put the diesel emissions scandal behind it with an emphasis on a future as a manufacturer of electric cars that feature connectivity and autonomous features in the mid- to long term.

Jürgen Stackman, the brand's member of the board of management with responsibility for sales and marketing, told AM at the Geneva Motor Show that Volkswagen has a renewed focus on electric cars, thanks in part to the problems it experienced last year, writes Craig Thomas.

"The issues around diesel acted like a turbocharger, a catalyst that allowed us to focus on electric cars. Sometimes big companies like us do need that impetus."

But first the company has to undo the damage to its brand, restore the trust of its customers - and fix their cars, which isn't a simple process.

Stackmann, pictured right, said: "If you look at the technology of changing what needs to be changed on the car - which is software, essentially - and return the car to the consumer without feeling it's changed, it's bloody hard work.

"People love their cars and they want them back with the same fuel economy, same noise levels, same power. That's what we're aiming at this year and I'm confident that for the vast majority of our customers we can achieve that. That's our biggest priority for this year, clearly. 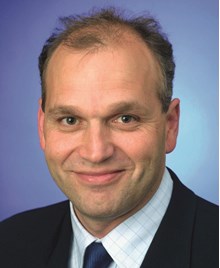 "We will be working with our dealers and our service network to convince each of our 5.6 million customers that we're competent, that we deliver a great service and that we can be trusted: that's why we're happy with the way that the first 10,000 Amaroks have been serviced and we had zero complaints from customers. Every time we release the next piece of software, the next vehicle line, we ensure that it's perfect: everybody has to be convinced that it's right before we move ahead.

"The next car is Passat, which is our biggest fleet car, so we need to make sure we get it 100% right for each customer.

"I went out to the 10 biggest fleet customers to talk to them - which is the first time they'd ever seen a board member in their offices - and hear what they were concerned about. Interestingly, they're not concerned about our quality or competence: they believe in the value of our cars. They were more concerned about the trust element and you can only convince them by talking to them."

Stackman wouldn't be drawn on questions of failings in Volkswagen's corporate culture, saying only that they were waiting for the report of the investigation by US law firm Jones Day, which will be published at the end of the second quarter of the year, alongside the company's financial results.

While that publication won't draw a line under the affair, Stackman does see a chance of moving on - but not make wholesale changes.

"There is an opportunity to shift, but I wouldn't call it a massive redirect. This is a wake-up call to make us seriously address the issues in the company and change the focus. It will take some time before customers really believe that."

The scandal will undoubtedly have far-reaching implications, so are they enough for Volkswagen to re-examine the very production of diesel engines?

"We are convinced that we will continue to make diesels for quite a while. If you at how we achieve lower CO2 emissions - especially in Europe - and how diesels have been accepted among our customer base, we're convinced that diesel has a good future. We have a job to make them sustainable, green and clean: but that is technically doable."

But it's another form of sustainable, green, clean powerplant that is the longer-term focus for the brand, with connected, autonomous electric vehicles very much to the fore in the company's thinking.

Stackman recognises that the company has some ground to make up on other carmakers, who have stolen a march in the propulsion technology: despite being involved in electro-mobility, Volkswagen doesn't have the position of leadership that it aspires to.

If you get it right, people will forgive. Toyota took a year and a half to get back to where they were before. That's a realistic timeframe. Jürgen Stackman, Volkswagen's member of the board of management with responsibility for sales and marketing.

"There will be some exciting questions to be asked about what will premium mean with electric cars. That's a great place for Volkswagen to play a stronger role. Then there's autonomous drive, which seems crazy, but I do believe in combination with electricity and connectivity it opens up a new sphere of mobility systems - specifically in metropolitan areas, where Volkswagen can play a role."

"And if you have the same infrastructure for recharging, people will enjoy making the move to electric. There's little downside to a long-range electric car. We're sure we can build a superior electric car."

And beyond the electric future, can we expect Volkswagen to launch a fuel cell car?

"Hydrogen fuels cells are the next step after batteries, because the question is not the fuel itself, but how does the fuel get created, transported and stored. That is the big question mark. Fuel cell will play a role, but it's further out than electric cars."

Finally, coming back to 'dieselgate', AM asked Stackman how long into the brave new electric future will it be remembered?

"It's tough to predict, but it will take a while. If you get it right, people will forgive. There will be latent references to this for quite some time, but we've looked at other companies that have had similar struggles - Toyota, for example - and it took them a year-and-a-half to get them back to where they were before. That's a realistic timeframe."

Volkswagen is clearly relying on millions of owners forgiving and forgetting. If it fixes their cars with a minimum of hassle, and achieves the electric future it's currently planning, they might  just do that.