Many UK franchised dealers continue to have a crisis of confidence in Fiat, Alfa Romeo and Jeep, as the latest NFDA Dealer Attitude Survey reveals the FCA Group trio as the worst performers on overall average satisfaction score.

In contrast, franchisees with Kia, Toyota, Mercedes-Benz and Lexus are all smiles. These brands achieved an average score of above 8 out of 10 in the 52-question survey, including the critical question of how franchisees would rate their manufacturer overall.

The networks that returned the lowest ratings to that critical question included Fiat (3.7), Alfa Romeo (3.5) and Jeep (3.4) again.

Yet it is Citroen dealers who are still hammering home the strongest message of dissatisfaction. Having come joint-bottom with Jeep in the previous survey at the end of summer 2018, Citroen remains in last place, and its value score has dropped further, from 3.4 to 3.3. 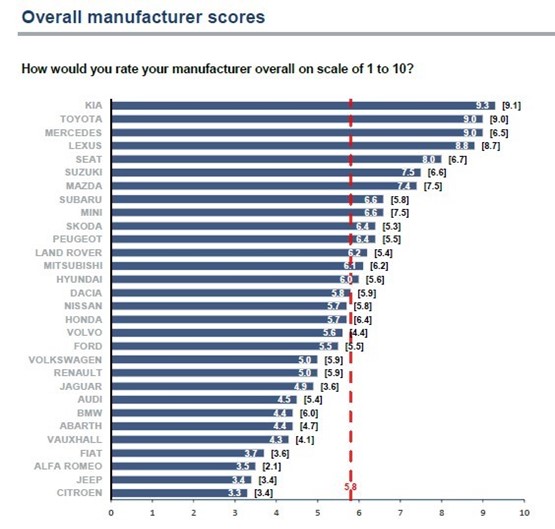 Following a disappointing performance in the last survey at the end of last summer, Mercedes has recorded the biggest increase in score with a gain of 89.4 points across the whole survey, and a climb from 6.5 to 9.0 in overall value of the franchise.

NFDA director Sue Robinson marked this 30th anniversary survey, adding that it was encouraging to see that, over the past thirty years, the NFDA Dealer Attitude Survey has become a reliable and respected tool to identify any potential issues affecting the working relationship between retailers and manufacturers.

“A constructive relationship between retailers and manufacturers is vital for the automotive industry to prosper and NFDA will be engaging with manufacturers to ensure that any concerns currently affecting retailers are addressed.”