Volvo will accept liability for vehicles in autonomous mode 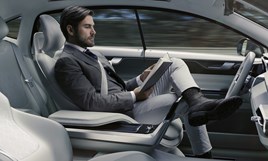 Volvo has said it will take full responsibility on behalf of customers for the actions of its vehicles while in autonomous mode.

The Swedish brand is pushing to have fully autonomous vehicles on the road by 2017 and it believes it is the first manufacturer to address the subject of self-driving cars and liability. It has also thrown down the gauntlet to other manufacturers to accept liability for any actions of the vehicle while in autonomous mode.

Dr Peter Mertens, senior vice president research and development at Volvo Car Group, said: “We firmly believe that carmakers should take full responsibility for the actions of the car when it is driving in full autonomous mode. If a manufacturer does not accept liability, it clearly implies that they are not confident about their autonomous drive technology.”

As Volvo heads towards launching autonomous tech on its next models, it has developed what it calls Concept 26 as an example of what a fully autonomous car journey will be like for commuters.

Concept 26, named due to the average commute time of 26 minutes, is based around a new seat design that cradles the driver during the transformation phase into one of the three modes: Drive, Create or Relax.

When the driver wishes to delegate driving to the car, the steering wheel retracts, the seat reclines and a large display emerges from the dashboard.

Robin Page, vice president of interior design at Volvo Cars, said: “It’s all about people. Our research clearly shows that some people will want to use their commuting time creatively when they have full autonomous drive available, while others will want to just sit back and relax, watch online media or listen to music.

“Autonomous drive will make all of this possible.”

Volvo Cars’ ongoing Drive Me research project  will see an extended fleet of fully autonomous cars driving real customers on the roads of Gothenburg, Sweden, in 2017.

Volvo posted a video of how the interior could change on its autonmous vehicles: