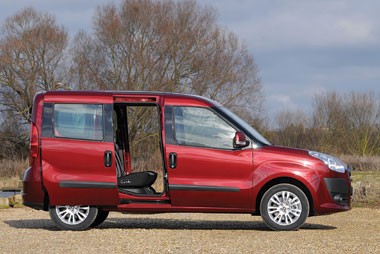 I take issue with pretty much everything the Top Gear brand churns out through its various media avenues, but I then saw its website review of the Doblo. It said the car is a van with glass.

And this was my perception when first getting behind the wheel.

The relatively austere interior space is exceptionally roomy, reinforced by the massive front windscreen which is very LCV like, but it is the engine and gearbox where the workaday impression is most lasting.

Relatively frugal it might be, but the 1.6 diesel is noisy, amplified by the airy cabin.

But before I whittle on too much, who is the Doblo for and is it hitting the mark in the market?

The primary target customers are families with two or more children looking for a practical and versatile vehicle that meets a variety of needs.

The secondary target customer would be empty nesters (50+) who prefer the higher seating position and the convenience of a traditional MPV, says Fiat.

So, customers are those folks that basically want van-like storage with additional bells-and-whistles.
Standard features like ESP, hill hold assist, front and side airbags will especially appeal to those family buyers.

The ergonomically designed cabin also offers great comfort to both the driver and the passengers, the high seating position, easy to reach controls and gear shifter are designed to make driving the Doblo feel more like a car rather than a traditional MPV.

The engine split equates to 25% petrol and 75% diesel with the most popular engine being the 1.6 16v Multijet.

New Doblo was launched in March 2010 and this new accounted for 386 units.

Fiat looks to its new model to boost its share of the small car market.