Was this article useful?
Click the thumbs up >
Mixing the big presence of the Phaeton, Golf components and the bold new grille of recent VW concept cars, the all-new Passat is on its way.

Caught hot weather testing in Death Valley, the latest incarnation of the D-segment benchmark, codenamed PQ46, will be launched at the Geneva show next spring. Although still bagged up like the household rubbish, the Passat’s classy silhouette and solid-looking sheet metal is betrayed.

VW’s mid-rangers have plenty in common beneath the skin, however. The Passat shares Golf chassis know-how, including its electro-hydraulic steering rack and capable, multi-link rear suspension. And many of the engines are pooled. But this time, Passat powerplants are mounted transversely, a break from today’s longitudinal configuration resulting from its genesis along with the last Audi A6. East-west engines save precious space which can be injected into the cabin, with a 60mm stretch and extra 50mm width further boosting accommodation, too.

Petrol engines kick off with the familiar 113bhp 1.6-litre and 150bhp 2.0-litre direct injection FSI units. The new Golf GTI’s 197bhp 2.0-litre turbo is also lined up, and a 260bhp 3.6-litre VR6 engine will power the hot R36 version. This will need four-wheel drive to put down the power, although cooking Passats are naturally front drivers. Power is transmitted to the wheels via six-speed manual boxes, traditional torque converter slushers or VW’s DSG twin-clutch ‘box.

Prices should kick off at about £16,500 when UK sales begin. A five-door estate will follow, with a sportier glasshouse and roofline eclipsing today’s boxy load-lugger. Inside, there will be room for around 500 litres of luggage behind the rear seats, which will fold flat. The boot should open remotely, too. 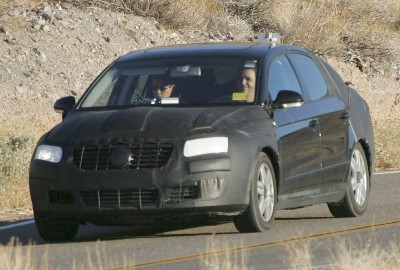 The Passat gets the new face of Volkswagen, with chrome, egg-crate grille and funky lamps mixing rectangular and circular shapes.