Was this article useful?
Click the thumbs up >
The odyssey of testing for Audi’s Q7 – taking in four of the world’s continents and extremes of hot and cold weather – is nearing an end, with the SUV’s official unveiling just a few weeks away.

The Q7 is spun off an overhauled version of the VW Touareg/Porsche Cayenne platform. It’s around 150mm longer than a Touareg to accommodate three rows containing six or seven fully flexible seats.

The Audi is designed primarily for the road, not off-road. It may have height-adjustable air suspension, like the A6 Allroad, but it’s more to hunker down the body over the wheels at speed and reduce drag, rather than climb mountains.

Audi has stripped some 200kg from the Touareg by ditching the VW’s mud-tackling equipment such as its diff locks and transfer case. Aluminium is also used more extensively, to sharpen handling and boost straight line speed.

At least two other engines are in the pipeline. The base powerplant is an upgraded version of the Cayenne and Touareg’s V6, but bored out to 3.6 litres and generating around 280bhp, the other Lamborghini’s petrol V10, detuned to 420bhp. A V8 diesel should also follow.

As these shots of a barely disguised car reveal, the Q7 is pretty faithful to the Pikes Peak concept. The bonnet is higher to meet pedestrian protection regs and the rear end looks less rakish to avoid back seat claustrophobia.

Inside, expect a typical Audi cabin: tasteful and bullet-proof. The MMI controller, keyless ignition and a full length sunroof number among the plush features. 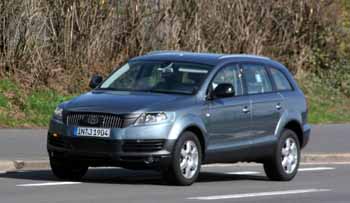 The platform is Touareg-lite, with diffs and transfer case stripped out to improve performance and handling.

V6 and V8 petrol and diesel engines, with a petrol 420bhp V10 also on the way from Lamborghini.