Was this article useful?
Click the thumbs up >
New car registrations were down in September, but only by 0.7% to 413,991 units.

"September registrations were some 20,000 units higher than we expected and this has got the 56 plate off to a racing start," said Society of Motor Manufacturers and Traders chief executive Christopher Macgowan.

"Traditionally an exciting time for buyers, September private registrations were on a par with last year's volumes. In respect of the overall market to date, although fuel price increases have eased, their volatility, along with concerns over possible interest rate rises, continues to affect customer confidence."

The Ford Fiesta was September's best seller. Its first time at the top of sales charts since March 2000. This helped it pass Vauxhall's Astra for second place over the year-to-date.

It was a good month for superminis, with five models in the top 10 and volumes up 10.4% to ensure net growth over the year-to-date.

The Focus was knocked off the top slot for only the third time in the past six and half years. Only luxury saloons, MPVs and superminis have shown growth over the year-to-date.

Diesel registrations rose for the fifth consecutive month. Registration volumes have grown in each of the past 24 quarters. The 2.9% growth in the third quarter was the best quarterly gain in 2006.

Keith Parry, head of the motor retail group at Barclays Business Banking, said: “The industry will be pleased with these figures, which are slightly stronger than expected. The positive signs have been there recently, particularly given the strong push by manufacturers to boost volumes in the market.

"The strong performance of superminis and Diesels could suggest a slight tightening of consumers' purse strings given the hike in petrol prices. Overall though private sales have remained stable, demonstrating motorists' resilience in the wake of the recent interest rate rise. Dealers will be crossing their fingers that this willingness to buy continues if rates go up again." 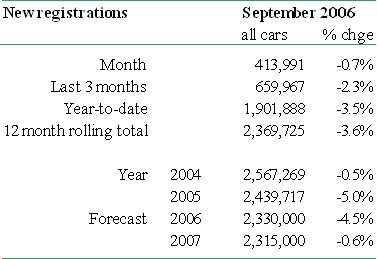 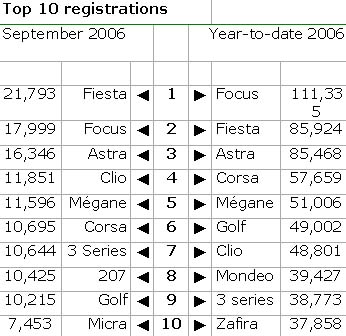 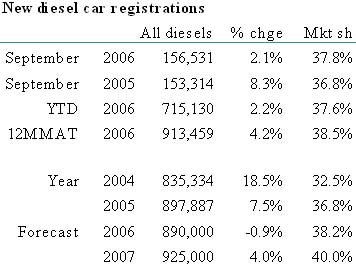 The 2007 AM Awards: We are now accepting online entries. This is your chance to be the best in the industry. You have until November 10 to make your voice heard. Click here to enter.