Was this article useful?
Click the thumbs up >
At last – some good news for Peugeot’s UK dealers. The 207 CC has begun winter testing, which means it’s on track for a summer 2007 launch.

Peugeot may have been the first mainstream carmaker to offer a folding tin-top roof, but it can’t afford to drag its heels with the MkII. The supermini CC market is already crowded with rivals from Vauxhall, Daihatsu and Nissan; Mitsubishi’s Colt CZC arrives this spring.

The replacement won’t change the formula radically. It’ll be a little roomier, thanks to the new platform’s longer wheelbase, which will make those occasional rear seats slightly less of a squeeze.

The prototype looks to have a three-piece roof, which will concertina into a tighter space, boosting luggage space over today’s cars. That makes for a slimmer rear end, too.

The 207 CC won’t be assembled by Heuliez, which currently builds the 206 CC. Peugeot suffered when teething troubles plagued initial 206 CCs. Car Top Systems, which makes the 307 CC, could well get the nod, or it could be assembled in-house.

Up front, the look is typical Peugeot: big smiley grille and feline headlamps. It’s an evolution of the 206 design. But there’s a quantum leap inside with a hi-tech info screen integrated into the dash, optional hands-free phone and plush materials.

Peugeot’s gruntiest engines will again provide the power for the heavier CC. Expect the 1.6-litre HDi diesel, with 110bhp. 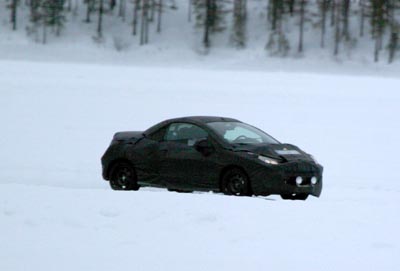 When the black bags come off, Peugeot’s feline face will be revealed, plus a more shapely rear than 206 CC.

PSA’s PF1 platform gives the 207 CC more space for its 2+2 layout and more boot space thanks to a more compact roof.