Was this article useful?
Click the thumbs up >
Good levels of buyer activity in the used car wholesale market saw prices remain firm during the first quarter of 2006, according to the latest data released by BCA.

Values in the fleet and lease sector rose to their highest level in over two years, with values increasing month on month in the quarter. Year-on-year, the first quarter (Q1) was over 7% ahead of 2005 and marginally ahead of last quarter versus guide prices.

Underlining what was a ‘bullish’ first quarter, part-exchange values also rose, with the average value breaking the £3,000 barrier. Despite little change in age and mileage, average values rose by £120 in the part-exchange sector, equivalent to a 4.07% rise over the previous quarter. Year-on-year, Q1 values are £100 ahead of the same period in 2005.

The only sector to experience downward pressure on values was nearly-new, where values cooled in the first three months of this year after reaching their highest average point for two years last quarter. However, nearly-new values remain well ahead against the same period in 2005 and 2004.

Using this information, BCA also produces the Used Car Index which shows where the wholesale market is going.

The first quarter saw the BCA Index rising marginally to 109.73 – the highest level in two years and some six points ahead, year on year.

It is the highest average quarterly value recorded for fleet and lease stock, even including the very bullish start recorded in 2004.

There has been little movement in age or mileage figures and performance against CAP Clean by fleet & lease cars increased from 96% to 97%.

Looking at the diesel/petrol splits in the fleet market highlights that diesel continues to enjoy a significant premium over petrol, despite generally being sold at a much higher mileage.

#AM_ART_SPLIT# In Q1 2006 the average mileage for diesel product at remarketing was over 67,000, compared to under 49,000 for petrol. Price performance on diesel remained on average over 7% higher than petrol. This price differential is slightly down on Q4, 2005, when it stood at 10%.

Looking at the monthly movement in values, part-exchange stock rose in value by £139 in January. This followed the pattern set in the generally bullish fourth quarter of last year and broke the £3,000 barrier for the first time. A slight shortage of part exchange vehicles early in the year will have contributed to this modest price rise as buyers competed for stock.

Into February and values fell marginally to just under £3,000 – perhaps reflecting a slightly leaner stock mix ahead of the March 1st plate change -before rising again in March, which was good month for all sectors with significant demand across the board.

Taking Q1 2004 as a base (100), the BCA Price Index tracks the average prices, weighted to volume, across these three key sectors of the marketplace to give an instant snapshot of where the market is going.

With a small value increase over last quarter, 2006 appears to have enjoyed a strong start in terms of used car wholesale price, despite difficult conditions for used car retailers. With nearly new prices remaining volatile, growth has come from the bread-and-butter fleet and part exchange sectors. The relatively benign economy and interest rates that remain unmoved for nearly a year will have helped.

The auction sector has experienced a relative shortage of vehicles early in 2006 and this has led to steady demand. Conversion rates are high, particularly where good quality, well-presented stock from the corporate sector is offered and competition from professional buyers is keeping values firm.

Currently the Index sits at 109.73, a significant improvement of over six points, year-on-year. 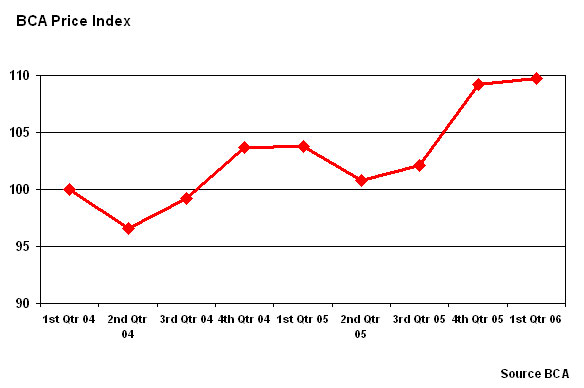