Was this article useful?
Click the thumbs up >
Women's tennis star Maria Sharapova has revealed her admiration for the love for Land Rovers.

The 19-year-old was in London for a pre-Wimbledon Sony Ericsson Women's Tennis Association (SEWTA) party in Kensington, where she helped give a sneak preview of the all-new Land Rover Freelander 2.

Sharapova is an official Land Rover ambassador in North America, where she promotes the vehicles.

Speaking at the event, she said: "I drive a Land Rover at my home in the USA. Since I was 15 and first saw Land Rovers in the US I have admired their unique design and Britishness. I currently have Range Rovers, but am a big fan of the new Freelander 2. I love the fact I can use my i-Pod straight through its sound system, and I can get my coach, my dad, my agent and all my equipment in the car too." 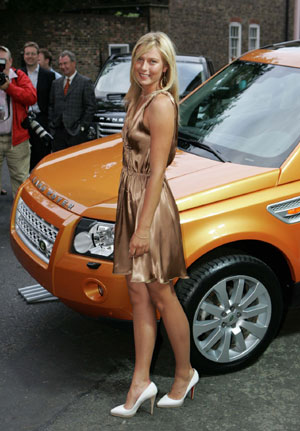 The SEWTA party was held at Kensington Roof Gardens in London, and was hosted by the owner, Sir Richard Branson.

The all-new Freelander 2 will appear at the British International Motor Show at the Excel exhibition centre in London's Docklands from 18 July 2006.