Was this article useful?
Click the thumbs up >
The Terios was always intended to spearhead Daihatsu’s attack on the sports utility 4x4 market in mainland Europe. Here, it’s been something of a stealth weapon, selling in small numbers (1,248 last year) since launch in 1997.

The update has been a long time coming, but worth it. The latest Terios is a stronger proposition than its quirky, niche predecessor. And it’s styled to European tastes, which will help dealers hit next year’s 3,000 sales target.

Daihatsu has 121 dealers and is hoping to recruit another 19 before the end of the year.

Terios will appeal to young families who want to make their first foray into the 4x4 market from Clio-sized vehicles. The step between the two isn’t actually that great.

Despite the raised seating position, Terios drives like a super-mini. It feels solid on the road, but ultimately it is an inoffensive driving experience. The only niggles are the ratchety gearbox and noisy engine at cruising speeds.

Journalists at the European launch were able to take the car for a timid off-road course, which the Terios took in its stride. But like most 4x4s, it’s more comfortable tackling speed bumps than churning mud.

The UK line-up includes three trims and just one engine, the 1.5 petrol, which is based on the Sirion’s 1.3 engine. Daihatsu is looking to add a diesel variant to the line-up at the “earliest possible stage”.

The interior may be cheap plastics, but it’s screwed together well with no loose fittings. CD player, air-con, airbags, seat belt pre-tensioners and rear parking sensors are standard.

All Terios models have a full-time 4WD system with a fixed 50/50 front to rear torque-split and centre differential. A fascia-mounted switch activates the electronically-controlled differential-lock.

Daihatsu expects the 1.5 SX to be its best seller in the UK. It adds alloys, front fog-lamps, smoked privacy glass for the rear doors and window, electric door mirrors and load-restraint ties to the entry model. 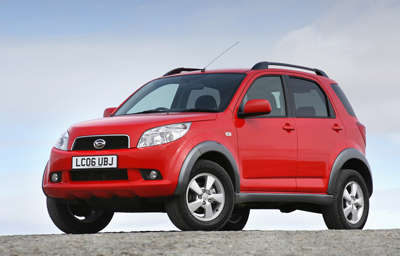 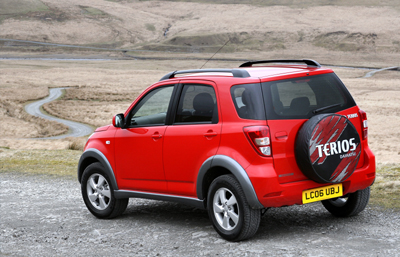