Was this article useful?
Click the thumbs up >
The view from the driver's seat is the main focus of the model year 2007 enhancements to the Saab 9-3 Sport Saloon, SportWagon and Convertible ranges.

The front fascia, instrument displays and controls have been given a cleaner, simplified look for ease of use.

The models now come with a close-ratio, six-speed manual transmission as standard.

The main instrument panel, including new infotainment systems, is now framed by a matte chrome line, with the same finish given to all key controls, which are now rotary in function.

The number of separate information displays and single-use buttons has also been reduced. As a result, all key driver information is now presented in the main instrument cluster, eliminating the need for the previous high level supplementary display on top of the main fascia. This centralises driver information and warning messages to a single zone, in the lower portion of the speedometer, improving communication as well as the aesthetics of the cockpit design. 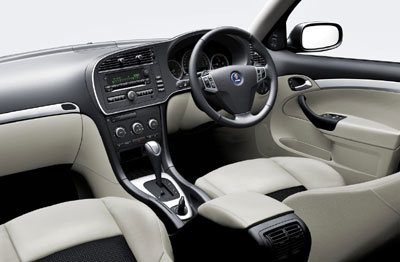 Dual-zone automatic climate control (ACC) is now fitted as standard throughout the range.

A choice of three 'infotainment' systems is offered, each of which includes a CD player compatible with MP3 music discs. Also fitted as standard is an auxiliary audio input.

All three 'infotainment' systems can be combined with a new hands-free mobile phone facility, the Bluetooth Phone Integration System (BPIS), which replaces the previous in-car integrated phone option. The enhanced audio range includes a new Bose sound system, offered exclusively in the Sport Saloon. With two rear woofers and twin amplifiers, its performance is optimised for the acoustics of the saloon cabin, giving an impressive, expanded 'concert hall' sound reproduction.