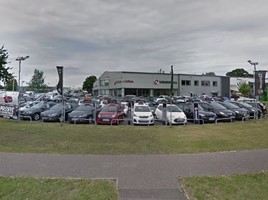 Caffyns has reported a 16% decline in operating profit despite rising revenues in annual results which detail the “very disappointing” performance of its volume car brands in 2017.

Commenting on the results, group chief executive Simon Caffyn, said: “We closed the year with a strong performance in the registration-plate change month of March and entered the current financial year with a stronger forward-order book than in the previous year, which is a source of encouragement, although we remain cautious about the outlook for the current year and recognise our dependence on the key trading months of September and March.”

The Eastbourne-based AM100 operation, which now operates a total of 12 locations across Kent and Sussex described the financial results from its Volkswagen division during its 2017 financial year as “very disappointing”, with new and used car sales declining from last year's levels.

It added that customers' confidence in the Vauxhall brand being “nationally at a low level” had resulted in its Ashford dealership finishing the year in a loss-making position.

In a statement issued by the London Stock exchange, the group was able to reveal that it would not be one of the Vauxhall sites that are subject to cuts within the network, however, stating: “The takeover of Vauxhall in the UK by the PSA Group and the recent announcement of a reduction in the number of dealers should improve the profitability of the remaining operators, of which the manufacturer has informed us we are one.”

Caffyns remained positive about the fortunes of its Volvo, Skoda and Seat dealerships, meanwhile.

The group is planning to expand its Volvo operation in Eastbourne to reflect the growth of that brand.

It is also expecting to open the doors of an all-new Audi franchise in Angmering during June.

The new Audi facility has been developed to facilitate the relocation and expansion of Caffyns’ Worthing business and will include new car configurator areas, a ten-car showroom and an aftersales facility featuring a fourteen-bay workshop and innovative drive-through service reception area.

The annual financial statement said: “Our other two Audi businesses, at Brighton and at Eastbourne, both performed well in the year with the Audi division making a significant contribution to the company's result.”

Despite used car sales remaining flat during the 2017 trading period, Caffyns said that margins had improved during the period and highlighted a 34% increase in volumes over a four-year period for the group.

It said that the Caffyns Motorstore used car business in Ashford had continued to expand rapidly with further significant increases achieved in sales volumes and in levels of profitability.

In citing the government's re-rating of commercial properties, implemented in April 2017, for a rise in the cost of business property rates in the current financial year of £0.25m, Caffyns also sought to highlight that it operates primarily from freehold sites, adding: “Our property portfolio provides additional stability to our business model.”

The group’s statement added: “The current consensus for the 2018 calendar year is for a further single-digit fall in the UK new car market so we are cautious about the outlook and remain dependent on the key months of September and March.

“Our balance sheet is appropriately funded and our freehold property portfolio is a source of stability, so we remain confident in the longer-term prospects for the company and ready to exploit future business opportunities as they may arise.”