Future Jaguars to be designed by cavemen

Was this article useful?
Click the thumbs up >
Jaguar and Land Rover will follow Aston Martin’s lead with plans to build its own design facility at its Gaydon engineering centre.

Ford has invested £1.96 million in a ‘virtual reality cave’ which it says will allow its engineers and designers to see in life-size three dimensional models which will eliminate the need for physical prototypes.

Al Kammerer, product development director for Jaguar and Land Rover, said: “The power of this project is unparalleled in our industry worldwide and will allow us to produce new vehicles on a much quicker timeline."

Raj Pandya, general manager, Sony UK, said: “We have been working closely with HoloVis International who have developed this innovative solution for Jaguar and Land Rover and the automotive industry. The Sony 4K projectors are four times the resolution of high definition, meaning it is almost impossible to see pixels on this size screen. These projectors are now going to affect the auto market in a drastic way."

The new Virtual Reality cave is due to be completed and operational at Jaguar and Land Rover's Gaydon engineering centre by spring 2008. 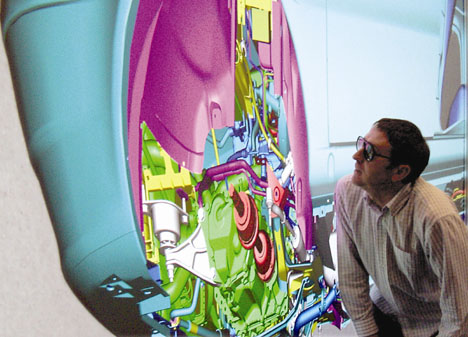 The concept of a 3D image is pretty much lost with the 2D image provided to illustrate Jaguar and Land Rover's design cave.