Was this article useful?
Click the thumbs up >
Loyal Terios owner, Ronnie Woods cannot believe his luck after having the entire cost of his new car reimbursed as part of Daihatsu’s 100th anniversary celebrations.

Woods, who lives in Newton Mearns near Glasgow, was the 100th Daihatsu customers this year.

Paul Tunnicliffe, Daihatsu Vehicle Distributors managing director, said: “We have several surprises planned this year to celebrate our 100th anniversary and this is just the first one.

“Clearly Woods’ windfall was pure chance but this reimbursement couldn’t have gone to a more deserving person thanks to his loyalty to the brand.” 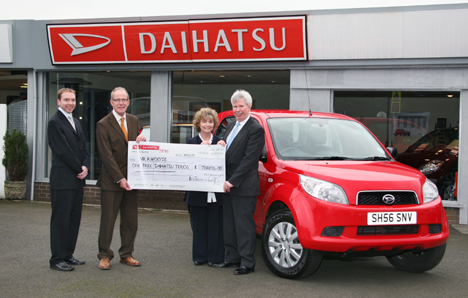