Was this article useful?
Click the thumbs up >
Following Porsche’s launch of a judicial challenge against Ken Livingstone’s emissions related congestion charge, it has now released its own examination of the expected CO2 savings.

Porsche believes that rather than picking on its motorists, the Mayor of London should be looking to the skies.

It used Transport for London’s own figures to calculate the savings expected in an entire year from the emissions charge. Porsche believes the amount of CO2 saved would equal to the emissions from Heathrow airport between four minutes and at most four hours.

“The emissions saved are a fraction of the amount of the CO2 pumped out every day at Heathrow. Calling this tax an emissions charge is a misnomer. Not only is this new charge an unfair tax on motorists and families, it is a tax that will do nothing to reduce emissions or congestion in London.”

The release of this examination comes two days after Porsche announced that it is seeking to make an application for judicial review of the proposed extension in the congestion charge, which will see the cost of driving some cars in the capital rise from £8.00 a day, or just 80p if they are residents in the congestion zone, to £25.00 a day. This will affect most of the models in Porsche's range.

Porsche is seeking a reverse of this action based on the "disproportionate nature of the charge".

Porsche also announced today that it has opened www.porschejudicialreview.co.uk for the legal case where families and motorists across London who will be impacted by the new tax can get more information and add their name to a petition against the charge. 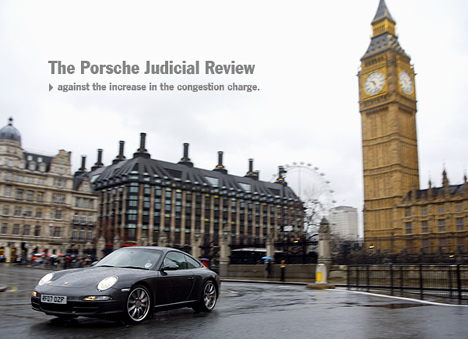