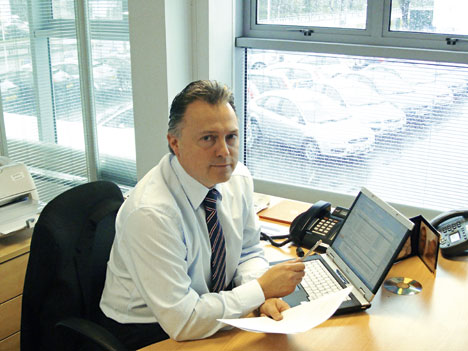 Potential is a word used a lot by the new management team at Eastbourne-based retail group Birchwood Garages.

It was potential that persuaded former Yeomans managing director Ian Sexton to buy a stake at the start of the year; potential convinced operations director Pete Parker to return to a business where he spent a brief few months in 2004.

Potential profits and potential growth are recurring themes – the word is used five times within the first 10 minutes of AM’s interview.

Birchwood has endured a troubled few years. Losses became the norm at the 11-year-old business and its reputation suffered.

Parker, previously in charge of the Surrey business for Ford Retail, puts the cause down to a lack of strategic direction.

“Birchwood was too heavy on the operational side and too light on the strategic side,” he says.

“Parts of the business were out of shape, but the potential was phenomenal.”

His first move was to restructure.

The headcount has been reduced by 35 people, mostly due to the closure of one of the two bodyshops, while the demonstrator inventory has been cut.

Insurance and valeting costs have also been reduced.

The savings are being re-invested in recruiting a human resources manager to help performance management and to evolve people, and a marketing manager to work the database and develop the website.

“We have a neutral reputation with customers. We want a must buy from reputation,” says Parker.

His mantra this year is growing sales, sweating assets and controlling costs.

“It’s all about New Birchwood – we don’t call it Birchwood any more when we are talking about the company,” Parker adds.

Part of the cost savings has been invested in a business centre at the Eastbourne Ford dealership, making Birchwood a serious fleet player for the first time.

Opening in May/June, it is expected to sell a conservative 220 fleet and commercial units this year, compared to Birchwood’s 160 last year.

It will also represent Birchwood’s new Skoda franchise, due to share premises with Mazda in Eastbourne in May, and will help build sales to the military from 350 a year to 550.

The Skoda operation fills a spot previously taken by a Ford commercial vehicle franchise, which has been moved to Birchwood’s Ford dealership.

This is what Parker means when he talks about sweating the assets.

Those assets at the Ford dealership will be sweated further.

By closing the on-site bodyshop, Parker has been able to move in the parts department and still have extra space for a workshop.

He intends to build a showroom onto the end of the Ford dealership for an unnamed volume franchise, using the spare workshop space for service and repair.

Parker is also looking to add another new brand to a vacant workshop site at Bexhill adjacent to its Ford Rapid Fit centre.

It’s a time of unprecedented change.

And the results are already being felt with the business achieving top level new sales targets for Ford car, Ford LCV and Mazda car in the first quarter.

Like-for-like, Birchwood is ahead across the business.

Turnover in the first quarter is up 30%, new car sales have risen by almost a third, used cars are up 16%, and service up 9%.

Key to achieving the 2008 business plan – breakeven on £38 million turnover compared to losses on £27 million last year – will be “hard work and dedication”, says Parker.

“You have to have focus, belief and leadership – then everything else fits into place around you.” Next year sees the second phase of the turnaround plan: people and process development.

#AM_ART_SPLIT# By 2010, Parker has benchmarked return on sales of 1.5% on turnover of £45m. At that point, the core values – trust, experience, value, choice and convenience – will be firmly imbedded into their culture.

“We will have established a general consensus about what brings customers to the door, what brings them back and what encourages them to recommend us to friends and family,” says Parker.

“We will have measurements in place, we will survey customers and we will have a robust complaints procedure.

Sexton adds: “Birchwood used to be a place where people were reluctant to join; now we have people ringing us to see if there any opportunities for jobs. There has been a transformation in three months.”