If asked to name the three best-selling off-roaders last year, most car industry folk would probably get pretty close
(it was Honda CR-V, Land Rover Freelander and Toyota RAV4).

However, if asked to identify the top three in the final quarter of 2008, people might struggle. In that period, Britain’s best-selling off-roader was the Ford Kuga, followed by the CR-V and the VW Tiguan. It was also the first quarter Land Rover had been in one of the top three places.

It is no coincidence that all three places were taken by the new breed of soft-roader. People want a high driving position without losing the car-like handling or, more importantly, the car-like fuel consumption.

What they do not seem to want are modernised versions of traditional off-roaders.

The rebadged Korean-made models are also struggling: the Renault Koleos (by Renault-Samsung) and the Vauxhall Antara (by Chevrolet) are having little or no impact.

It is remarkable just how the centre of gravity of this market has shifted.

At the launch of the Kuga last year, Ford had no intention of fighting for segment leadership – it just wanted to increase profitability by selling around 8,000 high spec off-roaders a year in the UK. Little did it know that 8,000 cars would soon
equate to being one of the big-selling models.

The compact, easy-to-drive, economical models are where the market is at. 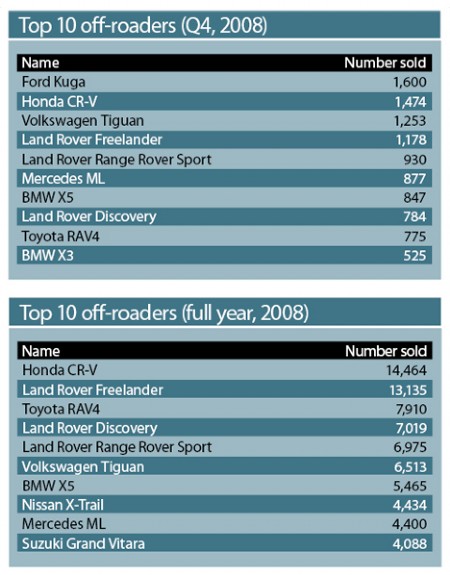 In the past, the off-road segment was a rising tide that would float most boats. Now it is suffering from a rapidly receding tide and, as a result, many models look like beached whales.

Of course, as so many off-roaders were planned in the boom years around 2005, they are coming to market at exactly the wrong time.

The market will still take a healthy interest in stylish designs that make it clear they are crossovers, but models that look like they want to be Land Rovers when they grow up are definitely out of fashion.

“This campaign is a step in the right direction in helping to restore customers’ buying confidence. Black Horse dealers can further help to stimulate sales by giving their customers access to credit at the point of sale.”

“This campaign demonstrates to the consumer that now is the best time ever to make a car purchase. Users of DMS’s system – Navigator - can use the system to assist in targeting this message to existing and new dealer prospects”

BCA is delighted to support the 'Buy a Car campaign'. As the UK's largest vehicle remarketing company, healthy new and used car markets are critical to our business and the myriad others that service and support the car retail and wholesale sectors.

But more than that, new and used car sales combine to make a sizeable contribution to the UK's economic well-being. Thanks to this and similar campaigns, motorists are becoming increasingly aware just what good value deals are out there for them to enjoy.