World's cheapest car due to be sold in Britain 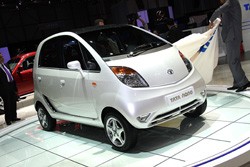 The European version of its Nano will be unveiled at the Geneva Motorshow this week with the eventual price rumoured to be about £4,400, reports the Times website.

Tata executives feel the car, introduced in India to tempt the middle classess away from their motorbikes and scooters, is ideally suited to cash strapped Westerners.

A European launch date has not been confirmed while the car is likely to undergo a comprehensive redesign to conform to Europe's safety standards.

Tata has the only crash test facility in India and says the Nano exceeeds the country's current regulatory requirements.

However, the car has not had to undergo total vehicle crash testing.

Airbags, rear seat belts and antilock braking systems are not mandatory in India, either.

Analysts believe that adding this equipment might have doubled its price on the sub-continent, where it is due to be sold for £1,400 and may explain the much higher price speculated for the European version.

The Nano has four doors and a rear mounted 2 cylinder engine producing 33bhp.

Do you think the Nano will be popular among British buyers? Click here to discuss this story on the AM forum.