Three bodyshops from the WNS Assistance network have been rewarded for their hard work at an awards ceremony. 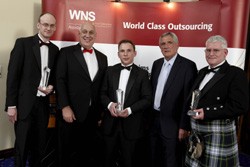 Corby Car Care of Corby were given the overall winner award followed by Smart Car UK of Romford, Essex and Edgefield Coachworks of Loanhead, near Edinburgh.

The event, held for the first time last year, draws attention to WNS's development of an internal standard.

The scheme measures several elements of each repair such as downtime, overall repair life cycles and customer satisfaction.

The top 40 performing bodyshops from the company's network of 340 repairers were invited, each of which received a "premier gold repairer" award while the top three also received individual trophies.

Former Leeds United player and member of the 1966 FIFA World Cup winning squad Norman Hunter was the guest speaker at the awards held at the Crowne Plaza at Birmingham NEC on Friday.