Average values across the board reached £6,028 in July – a substantial £178 (3%) increase over June’s figure of £5,850 and breaking the £6K barrier for the first time, according to BCA’s Pulse report.

Year-on-year values are now £1,079 or 21.8% ahead of July 2008 – reflecting both that values were falling sharply this time last year, and that 2009 has seen sustained improvements in value.

Performance against CAP has risen for the third straight month and is again averaging more than 100% of Clean values for all stock, underlining that demand continues to outstrip supply.

According to BCA’s figures for July, average values for fleet and lease cars rose by £324 while average part-exchange values climbed by £136 and nearly-new values improved by £745 – with a virtually identical mix of cars from the premium, volume and budget sectors as seen in June.

BCA’s communications director Tony Gannon said: “Values have risen by nearly £400 over the rolling three-month period despite the market now entering a period where values have traditionally softened over the summer holidays.” 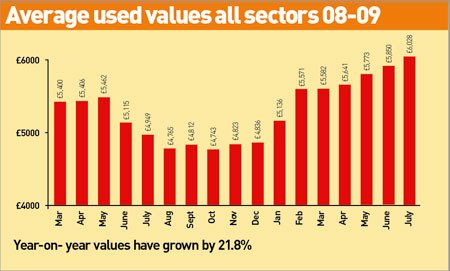