What a difference twelve months can make. This time last year the used car market downturn was fully underway as the recession began to take its toll, and the outlook for the coming months was bleak especially for the larger ‘gas guzzlers’ who were seeing average values plummet.

For a while average used car values did continue to drop up until the turning point in February 09 when stock shortages had the buyers clambering over what was available and taking advantage of the low prices.

From this point on, and over the last eight months, average used car values at 3 year 60,000 miles have seen an unprecedented rise which is only just beginning to see a cooling down effect. September 08’s Black Book 3yr 60,000 miles was down 3.3%, September this year was up 1.3%, a significant turn around in fortunes.

But which car models suffered the most during the downturn and which have benefited the most from the upturn? There were clear losers during the hard times but how have they faired since the market changed?

The best way to highlight the upturn effects of the last eight months is to compare them to the previous eight months where every car sector apart from the City car sector was feeling the pinch. From June 08 to January 09 overall average values at 3yr60k fell 18.3%, with the 4x4 sector suffering the most with values falling on average 23.5%.

The other major sector losers were the Executive, Upper Medium and Convertibles which all had average drops of over 22 per cent. Whilst seasonality had some part to play with the Convertibles, it was clear that the larger, less fuel efficient and more expensive cars were suffering the most.

Kia’s larger models were particularly sensitive to the downturn in the used market, with the average 3yr value of their 4x4 Sportage Petrol Estate falling 38.0% and the equivalent Diesel Estate falling 38.9% from June 08 to January 09; losing £2,950 on average from its value.

In terms of percentage loss in value during this period Kia’s Magentis Saloon was the second biggest loser with its value 46.3% less by January 09, with only BMW’s Alpine Saloon losing more value, a staggering 50.5%.

However Kia as a manufacturer was no worse off than others with it smaller cars, for example the Picanto on average actually increasing in value by 0.7% during the same time.

Of the other models that lost over 30% in value from Jun 08 to Jan 09, 4x4s and Executive cars made up the majority. Volvo’s S60 and Volkswagen’s Phaeton both suffered heavy falls in value, alongside three Japanese 4x4s; the Mitsubishi Outlander, Honda CR-V and Nissan Murano.

In complete contrast the City Car sector continued to thrive, the only sector that rose during this period, by 0.2%, with buyers turning to the more economical smaller cars. The Smart FourTwo for example was actually worth 20.5% more in January 09 than in June 08. Of the 17 models that actually increased in value, 12 were City Cars.

But this is a tale of two halves, and the last eight months from February 09 to this month have seen a dramatic change in the 3yr used values of many models. Of all the models that have increased in value since February, the 4x4 sector has seen the greatest increase with values rising 33.9% in eight months, a remarkable turnaround in fortune.

This has seen a recovery in values that has put the average 4x4 3yr60k value at 8.5% higher than in June 08. This has in reality been a particularly significant reversal in fortune especially for Kia, with the Sportage Diesel Estate having the biggest increase in value of all 3 year old models in eight months, up 63.1%.

This has actually equated to the Sportage Diesel being worth on average £262 more than in June 08. 4x4 models made up ten of the top twenty value increases from February 09 showing that despite fuel increases this year and the change to the VED bandings the 4x4 has renewed in its popularity.

The Renault Megane Scenic Estate had the next highest model increase of 57.2%, representative of the Mini MPV sectors overall average increase of 27.8%. Renault also came in third with the Megane Diesel Coupe Cabriolet increasing 54.3% in eight months.

In fact Convertibles represented several of the highest increases despite this year’s lacklustre British summer, with the Saab 9-3 convertible and Mazda MX-5 convertible also increasing by over 49%. Despite this 3yr old Convertible cars were on average still 4.3% less than their average value in June 08.

None of the defined sectors have seen their average values fall during the last eight months, though there are still clear winners and losers. The real giants, the Supercars and Luxury Executives have increased the least with only around a 10% increase from February.

This has meant that these sectors have not recovered all of the lost value of last year, and average 3yr values are still more than 10% less than June 08. For example, the Aston Martin DB9 Convertible lost £17,500 on its value from June 08 to January 09 and only recovered £6,700 from February 09 to September 09.

Convertibles, Sports and Executives are also all still on average less than their values in June 08. It is the smaller car sectors that have actually increased in value from June 08 despite the downturn. City cars performed the best with values up 18%, and Supermini values rising 16.9%. 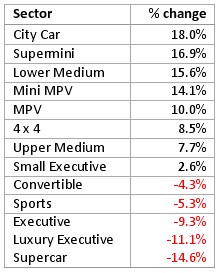 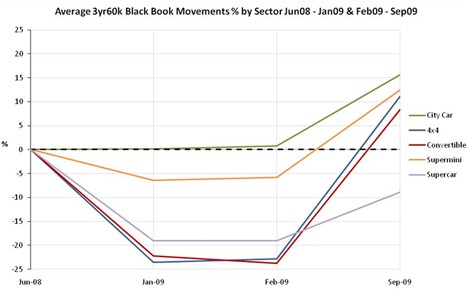