Vauxhall has revealed its facelifted Corsa which will go on sale in the UK in February next year. 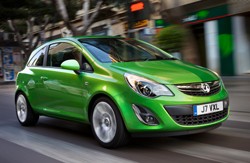 The Corsa, Vauxhall’s second best-selling model after the Astra, has now adopted styling cues from other recently launched Vauxhalls, such as the Insignia, Astra and Meriva.