Peugeot has unveiled its new “5 By Peugeot” luxury saloon concept which shows how the traditionally volume brand is trying to move towards more of a prestige image. 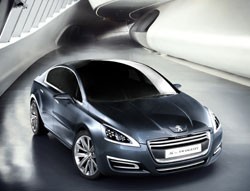 The concept is powered by Peugeot’s Hybrid4 200bhp diesel electric and the French brand said it was another indication, along with its RCZ 2+2 roadster, of where Peugeot is going in the future.

The new concept comes with four wheel drive and has carbon dioxide emissions of 99g/km which mirrors manufacturer’s pursuit of trying to find that balance between performance and low emissions.

The Hybrid4 engine technology featured in the concept will be launched in Peugeot’s 3008 MPV next year.

A 2.0 litre HDi FAP163bhp diesel engine, mounted at the front of the vehicle, is combined with a 37bhp electric motor at the rear. This arrangement provides an overall maximum power of 200 bhp, an electric only mode for low speed operation, four-wheel drive when required, and low fuel consumption and emissions of 74.3 mpg and 99 g/km of CO2 or zero in electric mode.