Hodgson, the north-east based family owned dealer group, increased sales across its four franchises for the 2009 financial year. 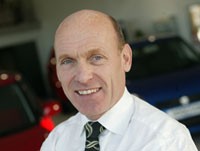 Sales were up across its Mazda, Mitsubishi, Suzuki and Toyota brands and over 40 staff had new salary packages put together for their hard work and dedication.

Speaking about the success of 2009, Steve Hodgson, managing director and owner of Hodgson said: “2009 has seen unprecedented levels of business failures and redundancies within the motor industry, but I believed it was crucial that we focused and concentrated on Hodgson and the future.

“Furthermore my unequivocal conviction is our future is in our hands irrespective of manufactures actions, the weak economy or indeed any other outside influences.”

Hodgson made no redundancies last year, didn’t reduce hours, no pay cuts were made and 17 new members or staff were taken on to increase the team to 150.

The group will open a new pre delivery inspection (PDI) centre and is continuing its project to build a new compact dealership/tower through its Autopod business, adjacent to its Toyota Gateshead Metro Centre dealership.