Surrey mechanic Stuart White has been named Top Technician 2010, after winning the annual competition which recognises and rewards the best automotive technicians in the UK. 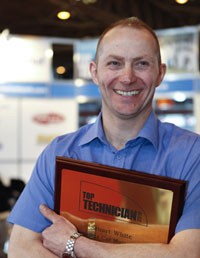 White is the boss of Complete Car Maintenance in the village of Ewhurst in Surrey, and was unveiled as the winner of the annual contest at the Birmingham NEC this month.

White has been a regular finalist in the hunt for the UK’s most gifted car mechanic but had never taken top spot before.

He took away £12,000 worth of prizes after winning through a series of online, practical and written tests set by chief examiner Ian Gillgrass of the IMI and his team of judges including Delphi trainer Rob Lewis and 2008 Top Technician winner Mark Banks.