Vauxhall has signed a three-and-a-half-year agreement with The Football Association which will see the manufacturer become a lead partner to the England football teams. 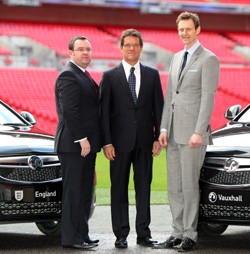 In addition to becoming the lead partner to the men’s senior national team, the partnership includes sponsorship of all other 23 representative England sides – including the women’s teams, men’s youth teams and all the England disability sides.

It will also see Vauxhall become the official vehicle supplier to The FA and the governing body’s official youth partner, covering activities undertaken to promote football in the 12-18-year-old age group.

In a seperate agreement, Vauxhall has also signed up to a three-and-a-half year contract to become a new lead partner of the Football Association of Wales (FAW).

The sponsorship also includes all senior Welsh international fixtures including the Euro 2012 Championships and the 2014 World Cup in Brazil.