AM100 autumn 2011: The elusive profit and investment balance

The news in the Spring AM100 was the acquisition of Wayside group by Jardine. This time there is another significant move in the top 20 groups with Benfield’s acquisition of Colebrook & Burgess.

Coincidentally, or perhaps just an indication of the attractiveness of the brand, both deals involved Audi.

The acquisition adds four sites in their heartland with a new albeit related, brand partner, a classic example of continuing a strategy of geographic and brand "grouping" focus.

Arnold Clark continues to grow both by acquisition, adding sites from Greenhous and John Martin and organically adding Chrysler and Jeep to existing Fiat locations. Arnold Clark also continues an impressive run of inclusion in the top twenty by return on sales percentage, albeit lower down than usual after a challenging year.

Vertu continues to add operations in all parts of the country, from Glasgow to Bristol, adding to the continuing challenge of building on the old Bristol Street businesses.

Vertu have not "bought big", but added in ones and twos – in direct contrast to the headline deals noted above. Will that bring greater rewards long term?

Total turnover for the AM100 up to the end of 2010 showed a strong recovery, adding nearly £4bn to the recession affected 2009 result.

However, it will be interesting to see how 2011 compares, as most groups are downgrading their expectations for the second half of the year, with new car sales, and therefore
volumes, being particularly challenging.

Taking the longer view, the 2010 recovery sees volume up over half since the beginning of the decade with the greatest amount of absolute growth, as you would expect, in the top 20.

Since this is where the more apparently newsworthy acquisitions take place, it is easy to be seduced into thinking that industry consolidation is finally happening.

However, when you examine the degree of growth, it is the segment just outside the top 50, quartile 3, ranking from 51 to 75 that the greatest percentage increase has taken place, followed by quartile 4, those ranked from 76 to 100. Perhaps even more interesting is that much of this growth has taken place organically, or with selective acquisitions to build on existing territory or brand.

A recent example would be the acquisition by Jacksons of the neighbouring Mercedes-Benz market area run by Tony Purslow which will create a group which would currently rank round about number 80 in the AM100.

It should come as no surprise that these two segments (Quartiles 3 and 4) contribute most of the higher performing groups by return on sales (RoS) and return on capital (RoCE).

2010 saw some further recovery in profitability, for those in the middle order, however the AM100 as a whole saw no change on the average for 2009.

This standstill is worrying, but not unexpected, given the context of more uncertain times and the expectation that such uncertainty will continue. 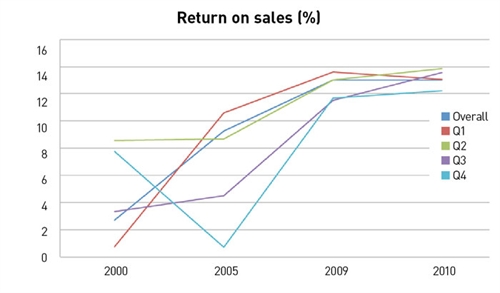 The ability to invest in the future is fragile. As the scale of the 2008 recession became clear, carmakers began to take a more reasonable approach to the requirement to invest in brand statements. The average fixed assets employed in each site, having risen sharply since the middle of the decade, plateaued between 2009 and 2010.

The burning question remains however – how much of the investment requirement relates to the value customers place on it and how much on the aspirations of the carmaker?

Profitability improved post-recession. But some of this is attributable to a reduction in the cost of money rather than an improvement in the relationship with customers.

Return on sales – a post interest measure – improves. Profit before interest remains stable. But the return on fixed assets – pre interest profit as a percentage of the fixed assets in use – deteriorates.

Too much investment in things that don’t mean much to customers? Too little investment in customer retention and person to person areas? Insufficient space here to do justice to the argument, but the warning signs are there.